To view it, click here. Well, I can say I've finished a trilogy that I started reading five years ago. Some of what happened was satisfying, but there was a lot of over-explanations, irrevelance and distasteful stuff going on here. It's really too bad, because the whole idea of government's overcontrolling its citizens and the invasion of privacy, preserving freedom, dystopic societies and everything else this book talks about is very interesting.

It felt like I was reading a book written for someone who just doesn't get it, can't think for themselves, needs to be talked down to. And I realize that the Evergreen Foundation had to make citizens afraid of a free and unchecked society, afraid enough to allow themselves to be controlled and tracked. But where in the heck did kidnapping and killing children come in? Yes, New Colony was decimated in Book One, but not for the purpose of killing children. Maybe that's why it felt so sinister then. After reading the first two novels, it didn't fit well.


I mean, maybe Hawks did it for shock factor, and yes, I know, the kids didn't die. But it was overkill, for me. Really, there are so many options to control people through fear, and I just thought that was a cheap and easy shot. Yeah, dead kids --real original and thought-provoking. Also, I didn't appreciate the way every little detail had to be explained.

If you're reading this book, you've probably read the first two, so why all the on and on?? And I didn't care for the whole "my daughter died, feel sorry for me and my terrible nature" turn that happened with Boone. If we have been hating him since book one, no sob story is going to change it. I liked the story enough, and I'm glad that I read it and closed out the series.

It wasn't totally satisfying and I feel like it could have been so much better. Not a good sign. For all of the buildup created in the first two novels about Gabriel and Michael and their dad, the actual meeting and conversations just weren't that revelatory. If there was a time in the novel to delve deep, that would have been it. If he writes another book, I would probably read it. But I am taking him off my favorite authors lists, which makes me a little bit sad. Oct 20, Emily rated it did not like it.

I like a good liberal rant against the erosion of civil liberties and the corporate takeover of the world as much as the next person, actually probably quite a lot more.

But when the author writes nonsense comparing something to "a chrysalis emerging from it's cocoon," it's pretty indicative of the level of the writing an the quality of the research in the books. For those not up on their butterfly science, that's like comparing something to a chicken egg hatching out from it's goose egg. Aside from those problems, the characters and the motivations just aren't believable.

Even as a borderline conspiracy theorist myself, I don't think the real motivation of the "vast machine" is control, nor is it so transparently evil. It's all about the bottom line, about capitalism at the expense of compassion. And there is way too much money out there to be made by corporations and special interests for such a singular system of control to succeed. That doesn't make reality any less threatening to our civil liberties, it just makes the books easier to dismiss as reactionary drivel.

Sad to say, I think the mainstream movie "Enemy of the State" made all his points much better than he did. Jul 29, JBP rated it liked it Shelves: read-in John Twelve Hawks' ultra-paranoid thriller trilogy finally loses some of its steam in part three. It's still enjoyable but Hawks replaces some of the breathless action scenes with events that are needed to put the story to an end. This includes lots and lots of speeches and long scenes in another conscious realm. The actual writing is probably better in this than the other two books but since it's less action focused, it doesn't have the same "page-turning" quality the others had.

Maybe I'm just John Twelve Hawks' ultra-paranoid thriller trilogy finally loses some of its steam in part three. Maybe I'm just super paranoid but some of the things Hawks writes about are already here or are on there way and that's truly frightening. In the guise of fighting terrorism, Americans have tossed away all kinds of civil rights just to be "safe" from an attack from an unknown enemy that may or may not happen.

The enemy itself might just be a creation to promote fear which allows a certain level of control by the population lessoning their concern over personal liberties. Frightening stuff. So, these books are based in some reality even though they are firmly in the sci-fi world of "what-if. Jul 30, Melanie rated it liked it. Great Book for me.

Exciting,albeit a little bit violent, but a very thought provoking book. Favorite Quote from book " Freedom is the ability to think, act, and express our views. IN a free society, our rights are respected as long as they don't harm others.

A political system that allows freedom has validity no matter how you view mankind. If you have a positive Great Book for me. If you have a positive view on humanity, then you can see how freedom allows new ideas and techinical innovation. Religious and political dictatorships lumber down the road like an old truck spitting out foul exhast. The entire country can't turn in a new direction when the scenery begins to Change.

The vast Machine carries us toward a world where free thought and the expression of those thoughts become difficult- and sometimes impossible. And the politics of fear gives our leaders the justification for more control. Sep 07, Jane rated it liked it Shelves: science-fiction. I was at Barnes and Noble this weekend, and spotted this on the shelf, much to my surprise considering it wasn't supposed to be released until today -- don't know how I managed to get an advanced copy. Anyway, the book is very similar to the other two in pace and theme, but it didn't feel like the completion of a trilogy.

Sep 22, Kathryn rated it it was ok. The concluding book to a trilogy that was weaker that the first two books. In fact it did not feel like a conclusion at all so perhaps there will be more. The plot and characters did not feel very developed in this book at all. It was like an episode in an ongoing TV show. Still entertaining but not very satisfying. This final volume in the 'third realm' series winds down somewhat, does not have the level of closure you would have hoped no spoilers.

So, who is John Twelve Hawks? My vote is Dean Koontz. Mar 18, Roxanne rated it liked it. Aside from being a bit pedantic and obvious with the messages - it was still a good, fast, un-put-downable book. I recommend the trilogy and the first of the series was the best for me - but after that you must read the final two. I really enjoyed it. Sep 22, Olivia added it. The ending to this trilogy the last chapter was so disappointing. It didn't feel like a real conclusion and the author seemed rushed at the end. Maybe he left it open for a fourth book Good book but not as good as the first two. Seems to set us up for a new trilogy due to the lack of resolution for some characters.

Mar 12, Sarah rated it really liked it Shelves: fantasy. Twelve Hawks continues his rendition on the classic debate between Order and Chaos, free will and control over the masses, in this final installment of his Fourth Realm Trilogy. And, he manages to do so while keeping the topic fresh and interesting, not to mention, relevant.

The idea of people purposefully living outside the Vast Machine is what drew me into this series, but I've enjoyed the progression of Twelve Hawk's plot. Sure, it became more fantastical, during the travels to the different Twelve Hawks continues his rendition on the classic debate between Order and Chaos, free will and control over the masses, in this final installment of his Fourth Realm Trilogy.

Sure, it became more fantastical, during the travels to the different realms and the access points for non-Travellers being incorporated in famous historical relics, but the gem of this third book came in one of the moments pre-climax, during a discussion of how to rally the resistance. Because they're scared, they want magic spells and secret passwords. 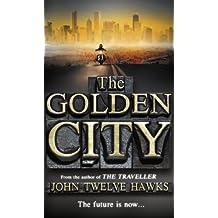 The series follows several groups of people, including the Tabula, which manages society through constant observation. Another group, [ Read More ]. The studio has acquired the rights to his Fourth Realm trilogy, according to Deadline.